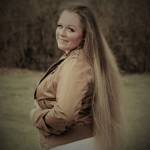 She has auditioned for The Voice in several citie